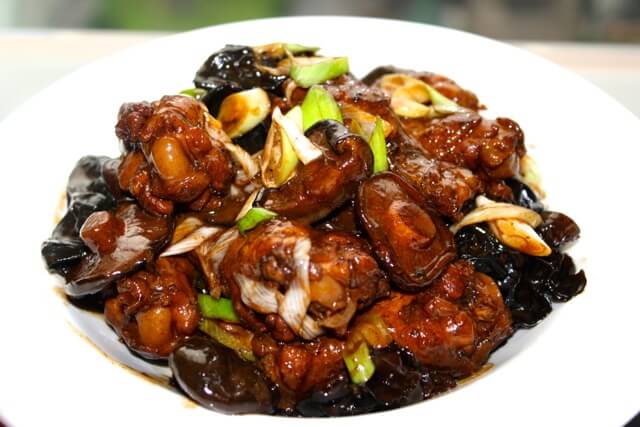 Soak the mushrooms in water for 30 minutes or until soft.  Squeeze gently to remove excess water.  Discard the tough stems and slice into 1/8-inch strips.

Pour boiling water over the golden needles in a bowl and soak for 30 minutes.  Drain, discard any tough stems if present, and cut the golden needles in half.  Cut the scallions thinly.  Flatten the gingerroot with the side of a cleaver or broad nife blade.  Rub the soy sauce into the meat.

Open up the ball of preserved turnip and rinse it well under running water to remove the excess salt.  Shred the turnip.

In a wok or large pot heat the oil to 375 degrees.  Fry the meat for 2 minutes on each side or until the skin is golden brown.  Remove the meat and drain off the oil.

Heat a wok or pot large enough to hold the chicken over high heat until a drop of water immediately sizzles into steam.  Add 2 tablespoons of the oil, 1/2 teaspoon of the salt, and the gingerroot.  Stir to brown the gingerroot slightly.  Add the mushrooms, scallions, water, sugar, pepper, turnip, golden needles, sherry, and the remaining salt.  Place the chicken on top of this.  Cover, reduce heat to medium low, and simmer for 15 minutes more.

Remove the chicken from the pot and chop into 1-inch pieces.  Place the chicken in a serving dish.  Add the cornstarch mixture to the sauce remaining in the pot.  Stir for 30 seconds to thcken.  Pour the sauce over the meat.

Any cookies that may not be particularly necessary for the website to function and is used specifically to collect user personal data via analytics, ads, other embedded contents are termed as non-necessary cookies. It is mandatory to procure user consent prior to running these cookies on your website.